The world’s first solar farm to power a railway line directly is due to plug into the track near Aldershot, paving the way for solar-powered trains.

From Friday, about 100 solar panels at the trackside site will supply renewable electricity to power the signalling and lights on Network Rail’s Wessex route.

The 30kW pilot scheme could pave the way for a larger project capable of directly powering the trains that use this route from next year.

Solar panels are already used to power the operations of train stations, including Blackfriars in central London. But the Aldershot project is the first time a solar array will bypass the electricity grid to plug directly into a railway’s “traction” system.

Network Rail hopes to use the scheme, developed by the charity 10:10 Climate Action and Imperial College London, to solar-charge its rail lines across the country.

Stuart Kistruck, a director for Network Rail’s Wessex route, said: “We have ambitions to roll this technology out further across the network should this demonstrator project prove successful, so we can deliver a greener, better railway for our passengers and the wider public.”

The research team behind the project, called Riding Sunbeams, estimates that solar could power 20% of the Merseyrail network in Liverpool, as well as 15% of commuter routes in Kent, Sussex and Wessex.

There is also scope for solar trams in Edinburgh, Glasgow, Nottingham, London and Manchester, according to the team.

The researchers began work on the plans over two years ago to discover whether bypassing the electricity grid could make solar power a more efficient energy source for trains.

Innovate UK awarded the project funding from the Department of Transportafter it proved that connecting solar power directly to rail, tube and tram networks could help meet a significant share of their electricity needs.

The falling cost of solar power technologies means these subsidy-free solar farms could supply electricity at a lower cost than the electricity supplied via the grid.

The findings come as plans to electrify Britain’s rail lines have faltered in recent years owing to concern about costs.

Leo Murray, the director of Riding Sunbeams, said future projects across the UK could be community-owned, and pay back benefits to local community funds. By the end of 2020, Riding Sunbeams hopes to build and connect the world’s first-ever full-scale community- and commuter-owned solar farm to UK railways.

Murray said the railways will be able to cut their running costs and benefit local communities while playing a part in tackling the climate crisis. “Matchmaking the UK’s biggest electricity user, the railways, with the nation’s favourite energy source, solar power, looks like the start of the perfect relationship.”

Murray added that the same model could be used across the world, particularly in sunny countries in South America, and India.

India is already home to 250 trains powered by solar panels attached directly to the roof of the train, but it plans to develop its own trackside solar farms because the weight of the panels means their trains need more energy than usual.

Indian Railways, the country’s single largest energy consumer, said last month it hoped to become the world’s first 100% “green” railway network in 10 years’ time by installing 30GW of solar generation capacity on some of its 51,000 hectares of vacant land.

The plan is part of India’s drive to replace polluting coal-fired power with cleaner energy sources, including as much as 100GW of solar power.

By 2025, Indian Railways expects to meet a third of its electricity demand from renewable energy sources by building 1.1GW from rooftop projects and 3.9GW worth of large-scale trackside solar farms.

Want a loan to install solar panels at your home or business? Here's what the banks are offering.

He said a typical solar panel installation, to power a small home between 4-7kWp, can cost anything between R60,000 and R105,000, excluding battery costs.

This translates into roughly R1.30 per kWh for the next 15 years, he said.

Commercial tariffs sit between 85c and R1.70 per kWh and residential tariffs can go as high as R2.20 per kWh.

This translates into roughly R0.90 per kWh for the next 15 years.

“It is very important to highlight that these upfront costs are no longer a barrier in the South African decentralised energy market,” Radmore told Business Insider South Africa.

“A number of innovative financial mechanisms exist that require no upfront capital from the customer.”

For example, he said, a power purchase agreement allows consumers to buy electricity per unit as they do from Eskom at a set price for between 12 and 15 years.

Radmore gave Business Insider South Africa a break down of what each bank is offering for solar panel installations.

It is important to note that solar panels are VAT deductible, and qualifies for a 12b tax benefit which can result in additional savings of 28% on cost. 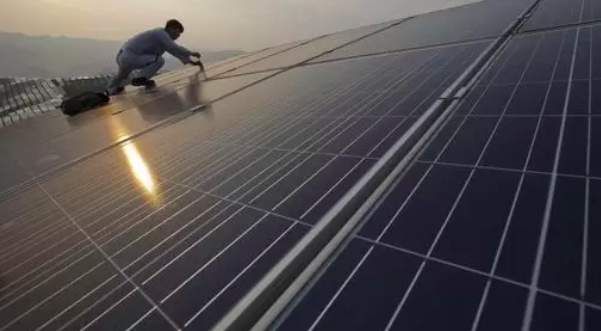 As a South African, looking at statistics like this, it is difficult not to feel that something is horribly amiss in our country.

Whereas we are in the grips of “load shedding” blackouts that are crippling an already-fragile economy; other countries are making massive strides in power production technology. China is a good example. From a virtual non-contender in the field of renewable energy production just over 10 years ago, the country has now become a world leader in renewables.

Coal was an obvious choice, since they have an abundance of it.

But coal is the dirtiest of the fossil fuels, and releases extremely high amounts of carbon and other greenhouse gases into the atmosphere when burnt. The smoke from power plants also caused large-scale pollution in nearby cities, making the air, water and soil toxic.

Things became so bad, people had to wear masks throughout the day, to protect themselves from breathing in poisonous gases. Despite this and other measures, people became seriously ill, and began to protest about the unacceptable pollution levels.

China gained a nasty reputation as the world’s biggest polluter.

Something had to be done urgently, and in 2007 the National Development and Reform Commission of the People’s Republic of China (NDRC) unveiled plans to increase solar power production to 1800 megawatts (MW) by 2020.

Solar farms began to spring up all over China, like the massive 27km2 Longyangxia Dam Solar Park in north-western Qinghai province, which is the biggest solar farm in the world. The facility is installed with 4 million photovoltaic panels and has a production capacity of 850MW, enough to power 200000 average households.

China is also home to the world’s largest floating solar farm, the 40MW power plant in central Anhui province, which floats on a lake that was formed when an underground coal mine collapsed. The water in the lake is full of toxins, and hence unusable for any other purpose.

Building the plant on a lake provides two advantages: it makes use of wasted space, plus the water helps to keep the panels cool, thereby optimising performance.

Other countries are also going all-out in adopting renewable power.

Germany, for example, has pledged to close down all its coal-powered plants by 2038.

It will be a remarkable achievement for a country that still relies on coal for about 40% of its electricity.

India is not too far behind, with aspirations to make a complete shift to renewables within a couple of decades.

The question is, why now? Why have all these countries accelerated their solar power production in the past five years, even though solar technology was available for decades previously?

The answer has to do with the cost and efficiency of solar panels.

Every year since they were invented in the 1960s, solar panels have become cheaper and more efficient, until they reached a point about a decade ago, when solar became a strong contender to coal.

Although still in its infancy, solar power technology has tremendous potential.

According to Kunal Mushi, founder at India-based Sunrator technologies, just 500000km2 of solar cells, about the size of Northern Cape and Western Cape combined, can power the entire world with clean, renewable energy forever, ending all our energy-related problems like global warming and oil wars.

The best part about solar power for a country like South Africa, is not just that it is free and renewable, but that solar power can be generated at three levels: on a massive scale to supply the national grid; on a city, town or village scale, to provide just that area; or on a domestic level to supply power to a single home.

Clusters of villages that are far from the national grid can benefit from small-scale solar plants that are set up close by to provide them with power, without the overhead of setting up distribution lines.

The question is, why has South Africa lagged so far behind the rest of the world in solar power production?